*~Book Tour: One Night with the Army Doc~* 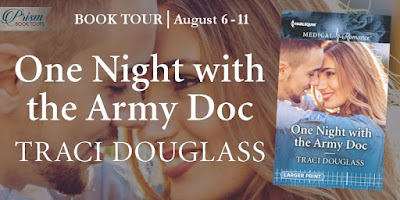 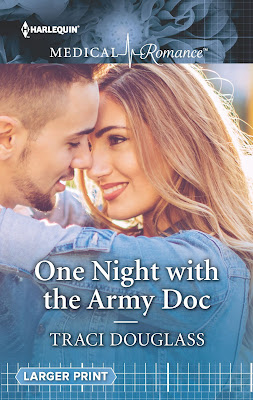 One Night with the Army Doc

Is one night enough…

To convince her to stay?

Traveling to Alaska to film the latest episode of her TV show is just what brilliant diagnostician Dr. Molly Flynn needs. It’s the perfect escape from her family’s expectations. Until she clashes with privacy-loving former army doc Jacob Ryder over her patient’s care! Only, as friction turns into flirtation, can Molly trust that Jake sees the real her and loves her—just the way she is?

Her cell phone buzzed and Molly pulled it from her pocket, hoping for an update from her crew. Instead, all she found was the same dumb message that had been on her screen since before takeoff from O’Hare. The stupid text from her ex glowed brightly, its cheerful white back- ground at direct odds with the dismal words.
I can’t do this anymore.
Not sure you’ll even notice I’m gone.
She resisted the urge to mic-drop the useless device into a nearby mud puddle and instead returned it to her pocket.
Looking back, she should’ve expected the break-up. Brian had always been complaining about her long hours and frequent trips, even though she’d been upfront with him about her demanding schedule from the beginning. And their blazing fights over the past few weeks had only served to resurrect painful memories of her father’s indifference and cruelty when she’d been a child—the day he’d called her weak for crying over the death of her pet cat, the way he’d taunted her because she hadn’t been able to make friends with the popular girls in her class, the night she’d graduated from medical school and overheard her father saying what a hopeless, awkward mess she was and how embarrassed he was to have her for a daughter because she’d been denied the membership of the Ivy League exclusive clubs and cliques her father had deemed necessary to mingle in his lofty social circles.
Even now those words gutted Molly to her core.
Brian, in the end, had pushed those same agonizing buttons, causing Molly to withdraw inside herself until they’d been basically nothing but glorified roommates. Still, she’d thought the year and a half they’d spent together rated more than a two-line text to end it all.
She guessed she’d been wrong about that too.
One more reason relationships were off her radar. Not even one-night stands. She preferred certainties to messy emotions, thank you very much. And, honestly, why bother when people left once you’d opened up and revealed your true, flawed self to them. Luckily, she wasn’t likely to find a man who’d challenge those beliefs out here in Alaska.
Ignoring the lingering sadness in her chest, she concentrated on Officer Not Budging, still blocking her path. Intimidation was out of the question, given the guy had at least a hundred and fifty pounds on her, but maybe a healthy dose of mind-numbing logic would do the trick.
Whenever she felt overstressed or insecure, random facts always popped into Molly’s head and out of her mouth. Blind dates, heated confrontations, heated situations of any sort, really. She’d ramble on and on about useless information until the poor victim’s eyes glazed over and they wandered off in a fog of utter boredom.
Considering she was thousands of miles from home, hopelessly lost, and late for a potentially career-altering meeting, Molly couldn’t get much more stressed. Plus, she’d done some light reading on the flight—facts and figures about Alaska, atlases, safety manuals, wildlife guides. Perfect for boring an unsuspecting cop to tears.
“Officer Bentz, did you know traffic fatalities in this state increased by twenty-six-point-eight percent from fifty-six in 2010 to seventy-two in 2011? Also, the percentage of statewide traffic fatalities related to alcohol-impaired driving decreased from thirty-four-point-three percent in 2009 to twenty-eight-point-six percent in 2010...”
Molly hid a smile. The man was fidgeting, his expression growing more uncomfortable the longer she droned. Soon the poor guy stifled a yawn and gazed skyward.
Chalk up another win for her near-eidetic memory.
“Most interesting of all...”
Officer Bentz looked at Molly again, his eyes as blank as his expression. “Go on ahead. I’m sure you can help with something. In fact, ask for Jake. He’s with the ambulance crew tonight. He owes me one anyway.”
“Thank you very much.”
She turned on her heel and sidled through the maze of squad cars and fire trucks toward what she could now see was an overturned vehicle. During her emergency medicine rotation in Chicago, Molly had treated plenty of accident victims. That had been a while ago, however, and she’d been out of the ER trenches since signing on to do her TV show.

Fresh nerves and adrenaline quickened her steps and her pulse. Amidst the bright floodlights set up around the perimeter of the scene, Molly peered past the end of an ambulance in time to see a huge metal claw rip off a chunk of twisted debris from the SUV’s side. 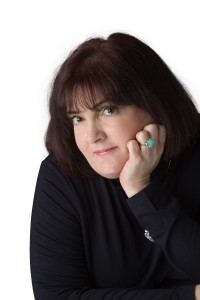 Thrilling Tales of Suspense, Fantasy, and Happily Ever Afters…

USA Today Bestselling Author Traci Douglass writes fiction bursting with romance and action, usually mixed with a healthy portion of fantasy, urban edge and/or snark. Her stories feature sizzling heroes with quick wits and dark pasts and smart, independent heroines who always give as good as they get. 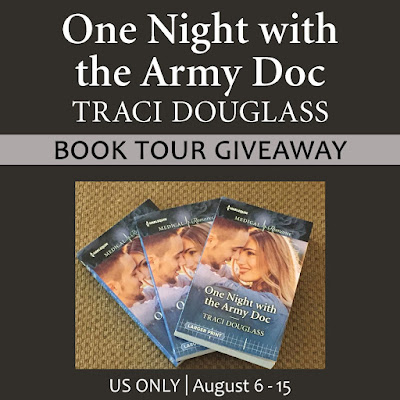 3 signed paperback copies of One Night with The Army Doc

US only
Ends August 15th