*~Book Tour: His One and Only Bride*~ 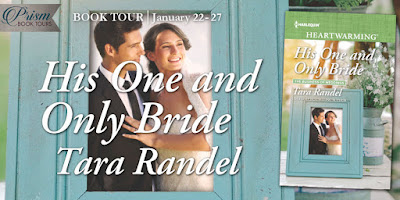 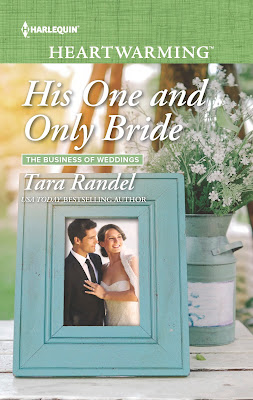 His One and Only Bride
(The Business of Weddings #5)
Tara Randel
Contemporary Romance
Paperback & ebook, 384 pages
January 1st 2018 by Harlequin Heartwarming

After being reported missing, presumed dead, globe-hopping photojournalist Mitch Simmons never thought he’d see his estranged wife, Zoe, again. Yet here he is back in their coastal Florida town, where Zoe is mayor. Turns out she isn’t the only one he left behind.

Discovering he has a baby son awakens thrilling new emotions in Mitch. And there are his still-powerful feelings for the high school sweetheart he vowed to love and honor forever. Thankfully, they’ll have the chance to find the love that was always there…


They sat for a few minutes, watching the scene play out around them.
Little children scampered about, mostly followed by mothers with a frazzled look Zoe recognized. Leo was already too curious for his own good; she couldn’t imagine what it would be like when he could really toddle around.
The green-blue water lapped against the sugary white sand, calm in the sea-scented breeze. Seagulls squawked, hovering in the sky until finally diving to snag food just below the water’s surface. One little boy held up what Zoe thought might be a sandwich, but his mother quickly snatched it away. If the gulls knew there was human food offered nearby, they wouldn’t leave the youngster alone, which created a mess for everyone in the vicinity.
“Do you bring Leo here?” Mitch asked.
“Sometimes. He’s still too busy putting everything in his mouth so I err on the side of caution.”
“Sand isn’t the most appetizing.”
“The one time he did get some in his mouth he tried spitting it out. I was trying hard not to laugh at his hysterical facial expression while at the same time telling him, no.”
“He listens well?”
“He does, but he is very inquisitive. I’m constantly watching him so he doesn’t get himself into trouble.”
“Isn’t that part of growing up? Making new discoveries?”
“He’s only a year old,” she replied, tone dry. “He still needs guidance.”
Mitch sent her a black look. “Are you laughing at me?”
She grinned. “Not really. I just know if you had your way, you’d encourage him to try new things, even though he’s still too young.”
“Believe it or not, I’m not totally clueless. I can wait until he turns two.”
Zoe glanced at Mitch’s handsome face. Despite the paleness and general look of exhaustion, she saw real humor light his eyes for the first time since he’d been home.
“I always imagined I’d have to keep an eye on you two. I have a feeling there are going to be a lot of don’t-tell-Mom moments in my future.”
“Does that mean you won’t fight me about being active in Leo’s life?”
“Not unless something happens to warrant it.”
Zoe reached out to touch his arm, then pulled back. Touching probably wouldn’t be a good idea. Not yet.
“Mitch, I get the feeling you’d rather not talk about it, but at the doctor’s visit today, you didn’t seem very…interested with your treatment.”
He gazed out over the water. “I’ve had my fill of being poked and prodded.”
“But you do want to improve, right?”
“More than you know.” His words, though impassioned, where spoken so quietly she had to strain to hear his voice.
“So you do what the doctor says.”
“I think I have a much more detailed concept of what my prognosis will entail. Therapy. Tests. Appointments. And all the while questioning if I’ll remain in this condition permanently.”
“Which you’d hate.”
“Exactly.”
A shout drew Zoe’s attention to the water. A boy splashed his mother while she tried, unsuccessfully, to scold him.
“At the risk of sounding overly optimistic, think positive.”
“I’ll try,” came his droll reply.

USA Today Bestselling Author Tara Randel has enjoyed a lifelong love of books, especially romance and mystery genres, so it didn't come as a surprise when she began writing with the dream of becoming published. Family values, mystery and, of course, love and romance are her favorite themes, because she believes love is the greatest gift of all. Tara lives on the West Coast of Florida, where gorgeous sunsets inspire the creation of heartwarming stories, filled with love, laughter and the occasional mystery. 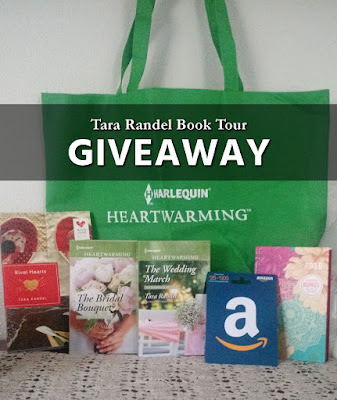 - US PRIZE PACK: Signed copies of Rival Hearts, The Bridal Bouquet and The Wedding March, a Harlequin Heartwarming tote bag, a 2018 appointment planner and a $25 Amazon gift card
- US residents only
- Ends January 31st