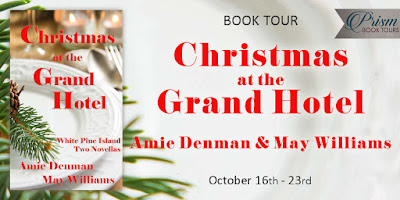 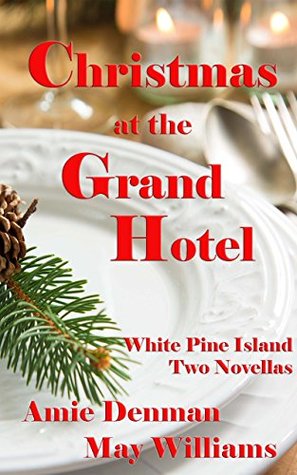 Welcome to White Pine Island! Just a few miles off the coast of Georgia, this island is accessible only by boat, plane, and your imagination. Many residents call the island home year-round, but day visitors and tourists bring plenty of excitement with them. Like other resort islands, there are quaint shops, cool restaurants, and friendly bars. There are several resorts on the island, but the queen of them all is the elegant Grand Hotel on a bluff with an ocean view. Owned by the extensive, multi-generational Phillips family, the Grand Hotel offers elegant service, five course dinners, and plenty of romance.

Ned & Bethany by May Williams

Sometimes the heart hits a hole in one…

Bethany Hinkle arrives at White Pine Island’s Grand Hotel for her sister’s wedding and to do a little environmental snooping. She snaps pictures of the hotel’s pristine golf course to ensure its compliance with EPA standards. Soon, she realizes that the course’s manager is as attractive as the course he so carefully protects.

Ned Phillips feels the weight of family expectations squarely on his broad shoulders. The Phillips Family has owned and operated the Grand Hotel for three generations. For now, he manages the hotel’s golf course and makes plans for its future—plans that could be destroyed by Bethany’s spying. He gets close to the lovely environmentalist to watch for her next move until he gets too close to let her go.

What happens when you fall in love with your best friend just when it’s too late?

All her life, Ellen Phillips has loved working for her family’s Grand Hotel on White Pine Island. Flying the hotel’s airplane and piloting the island ferryboat while knowing someday she will inherit the luxurious resort is a fairy tale existence she has no desire to change. She’s always loved Pete McCormack, too. After all, he’s her best friend, confidante, and playmate. Until she suddenly sees him in a different light just before Christmas.

Pete McCormack has made sacrifices for his family’s golf cart rental business on the island, choosing to stay home and run it instead of pursuing his dream of his own career on the mainland. When his parents announce their plans to sell the business so Pete can leave the island, he has to choose between the future he thought he always wanted and his newfound love for the woman he would be leaving behind. 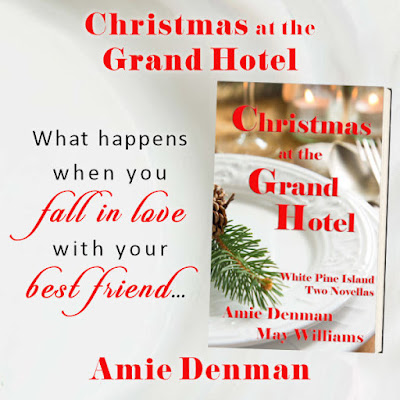 White Pine Island: Novella Two: Ellen & Pete by Amie Denman
Pete drew in a steadying breath when he saw Ellen approaching in a body-hugging dress. Her long blonde hair flowed over her shoulders. It was almost completely dark as the calendar ticked toward the shortest day of the year, but his best friend was illuminated by Christmas lights as she picked her way along the path toward him. And he would know her anywhere, just from her walk, her presence, everything about her.
It was worse than he thought, the strength of his feelings for her. But a relationship with Ellen Phillips was just one more missed chance in his life. Even as he considered taking a chance and grabbing his future with both hands, he was painfully conscious of what he was leaving behind.
“I hope you haven’t been waiting long,” Ellen said.
“Only a few minutes.” Years, ever since I realized how beautiful you are and how right the world feels when you’re next to me.
“Check these out,” she said, holding up the cake slices as she climbed the steps to the porch. “It was the fanciest cake I’ve ever seen. These better taste as good as they look.”
She set the plates on a little table between two rocking chairs. “Be right back,” she said. “Have to grab something to wash this down.”
“Need help?”
She had already turned away, but she swung around and smiled at him, her face catching the glow from the Christmas lights. He was the one who needed help.
“Wait right here for me,” she said.
Pete sat and rocked while he waited for Ellen to return. He had to tell her tonight. It was a miracle she didn’t already know. And he knew she didn’t. It would have shown on her face. Neither of them was any good at hiding things from the other one.
They’d eat the cake first. Have a drink. And then he would tell her he was leaving White Pine Island.
He heard her heels clicking on the porch floor before he saw her. He got up and took both very full glasses of champagne.
“Only spilled a little,” she said.
She sipped her drink and set it on the table. Picked up the cake plate and lopped off a huge piece with the heavy silver fork.
“The chocolate looked good, but I knew you liked white,” she said. “The beer selection also looked good, but I know your dirty little secret. Golf cart mechanic with a hidden passion for bubbly.”
“You’ll ruin my reputation as a man’s man,” Pete said.
“Your reputation is safe.”
Ellen kicked off her shoes. How many times had they sat, barefoot, on this porch? Or on the dock downtown. Or on the patio at his parents’ house behind the golf cart rental. Or on the beaches that surround the island.
Pete finished his cake and drank half his champagne. It was comfortable, sitting on the porch of the Grand Hotel with someone who knew him as well as he knew himself. But he had to tell her.
“You might as well say it,” she said. She put down her empty plate and sipped her drink. “I know whatever is bothering you is something big. And I suspect I’m not going to like it.”

Amie Denman lives in Ohio with her husband, sons, cats, and dog. When she's not reading or writing, she enjoys walking and playing outside. Born with an overdeveloped sense of curiosity, she's been known to chase fire trucks on her bicycle just to see what's going on. Amie believes that everything is fun: especially roller coasters, wedding cake, and falling in love. 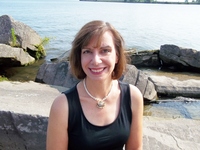 May Williams is convinced that she read every book in the public library of her hometown as a kid. Today, her house sags under the weight of books. If she’s not reading or writing, May can be found pursuing her other two passions – sewing and running. May lives happily in a little town on the shores of Lake Erie with her husband, two children, three cats, and one oversized dog.