About the Book:
GOONIGHT FROM LONDON
By Jennifer Robson
Trade Paperback  | on sale May 2, 2017 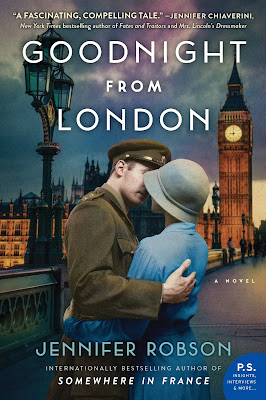 Courageous, ambitious Ruby Sutton can’t believe she’s landed her dream job, covering the war from London for the American magazine Picture Weekly.  Ruby jumps at the chance to prove herself, and re-set the fate of her humble beginnings in a town where no one knows her name.

Though welcomed by most of her new colleagues, Ruby comes up against her share of sexism and anti-American resentment. Slowly, she starts to find her feet and feel at home in a country that is so familiar yet so foreign—when the bombs begin to fall.

Against a harrowing backdrop of sirens, nightly raids and demolished buildings, Ruby finds comfort in friends Kaz, Mary, and others, and satisfaction in her success as a reporter, even as the nightly horror of the Blitz stretches on.  In an engaging story that spans the length of the war, Ruby slowly builds a meaningful friendship with British Captain Charles Bennett—a kind, distinguished man with secrets he cannot share.

From the ruins of war, Ruby and Bennett manage to build a romance satisfying enough for her to consider making England her permanent home.

Jennifer Robson is the USA Today and #1 Toronto Globe & Mail bestselling author of Somewhere in France and After the War Is Over. With a doctorate in British economic and social history from Saint Antony’s College, University of Oxford, where she was a Commonwealth Scholar and an SSHRC Doctoral Fellow, her insightful knowledge and deft writing imbues her stories with a palpability and sense of place that truly sets them apart. She lives in Toronto, Canada with her husband and young children.

Email ThisBlogThis!Share to TwitterShare to FacebookShare to Pinterest
Labels: historical